Yesterday afternoon we had a review to do for What's Good To Do. I like doing reviews of family shows as it makes a nice change taking the boys out to a review and they always enjoy the shows. William was busy revising so we borrowed Charlie and drove to Preston Guild Hall to see Comedy for Kids. 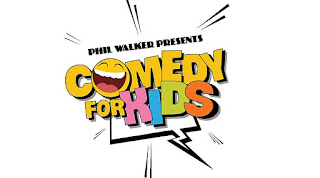 Hosted by local comedian Phil Walker, the show was around two hours long, including a short interval and starred El Baldiniho and Howard Read. We both enjoy comedy shows but this was the first time Luke and Charlie had experienced a comedy show. They both enjoyed the Christmas pantomime that Phil wrote and starred in so we thought this would be a good way to introduce them to comedy and a nice way to spend a bank holiday afternoon.

Phil welcomed the audience and got everyone warmed up with a quick game of Simon Says and a rendition of Cry Me a River that the children loved especially as it involved spraying half the audience with water! Luckily we were far enough back not to get wet although I suspect Luke and Charlie would have liked it if we had!! Phil was very entertaining and I could have watched him all afternoon, he was great with the children and made everyone feel very welcome.

The first act of the show was EL Baldino a “larger than life” magician. The boys thought his opening trick, pulling a great length of ribbon from his mouth was really impressive. Some of his jokes went straight over the children’s heads which may have been intentional but helped keep the adults interested. Moving quickly through his tricks he encouraged audience participation bringing one excited boy onto the stage to assist. We thought this was one of the funniest parts of his act and had our boys in fits of laughter too.

Prior to the interval Phil invited the children to come to the stage and write their favourite jokes on a piece of paper. Almost every child in the theatre ( apart from ours who were both too shy) rushed down to share their joke and then after the interval four jokes were drawn and the children invited up onto the stage. Phil had a great rapport with the children and really pitched his act at their level. The children were so excited being on the stage and I am sure they will remember the experience for many years to come.

Howard Read then took to the stage and started with a game of “real” Guess Who. During the interval he had chosen a couple of members of the audience at random and drawn cartoon versions of them. We all had to stand up and the children narrowed down the options by asking questions - “does he wear glasses?” “Does he have brown hair?” etc. This was really fun and encouraged everybody to take part in the show. I really liked this game and it would be a great game for Cubs and Scouts to play.

Howard continued with more madness including plenty of the obligatory fart jokes which had the boys and the rest of the children giggling loudly. The children enjoyed every minute of his act and decided he was their favourite.

This was a great show and both our boys really enjoyed it.  It was a great introduction to comedy and we all had a really good time. Phil has created a great show that will appeal to both children and adults and with more shows planned for the summer holidays it is a great way to keep the children entertained.