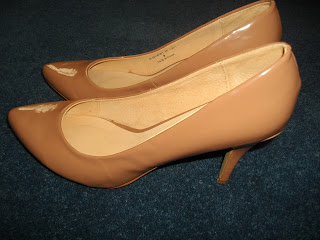 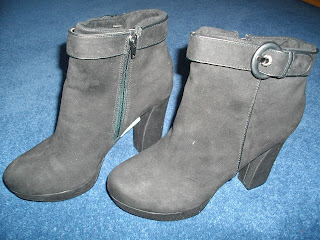 Now you can never have too many shoes (that's right isn't it Bill?)

Here are my latest shoe purchases - I went on a spending spree in Debenhams on Monday and these are the shoes I bought.

I am hoping for some good weather so that I can get plenty of wear out of the sandals and if we have another wet summer I am prepared with my new boots. 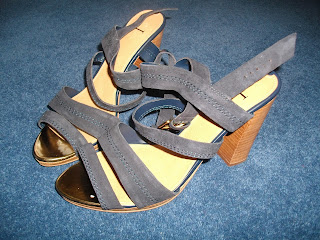 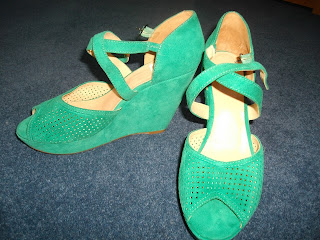 The Black Dog chain's third Manchester site, Dog Bowl, is a bowling, drinking, dining experience in Manchester. The venue is very smart and has an impressive range of cocktails and Tex Mex food with the added excitement of 5 ten-pin bowling lanes. Whilst I can see this being a great night out with friends The Black Dog chain have also decided to let the children enjoy the experience too and they are welcome between 10am and 3pm at weekends and also during the school holidays. This is a fantastic idea as everyone wins; the children (and adults) get to have fun bowling in lovely surroundings and instead of the normal burger and fries there is a fantastic choice of Tex Mex dishes made with local produce. The menu has something for everyone with steaks, fajitas, quesedillas, salads and plenty of burgers as well as a reasonably priced kid’s menu of 3 courses and a soft drink for £6.50.

We were booked in for 11am on Saturday morning and found it very easily; it was only a couple of minutes’ walk away from the Palace NCP car park and even nearer to Oxford Road Station.

I was really impressed when we walked inside; there was plenty of seating as you entered with a well-stocked bar area. As this is a new venue everything was lovely and shiny and the 5 bowling lanes looked stunning. We were greeted and taken to change our shoes by the friendly staff. They had plenty of the larger shoe sizes, however there were no shoes to fit my youngest son, although as he was wearing trainers they said he would be fine wearing them. We were given a card to write down our names and the girl added them to the computer ready for us to start the game. We were given the choice of whether to have the buffers up in the gulley and my youngest son who is 7 decided he needed them and the older boys who are 10 and 11 thought they would play without them. They told me I couldn’t have them either so it would be a more equal game. I thought this was really good as when we have played at other Ten Pin Bowling alleys the buffers are either up for everyone or down for everyone so being able to choose per player made the game fairer.
We all enjoyed playing 10 pin bowls and found it was a much more pleasant environment with only having 5 lanes. All 5 lanes were in use and there seemed to be the right amount of bowling balls to suit everyone, we only used the lighter bowling balls but there were also plenty of the heavier ones still on the racks behind us. There were also three of the metal guides for the younger children to use and whilst we did share we didn’t wait long for our turn.
Part way through the game George, who is 10, was sending more balls into the gutter than down the lane and was getting a little disheartened so I went to the counter to see if it was possible to add the buffers for him and found out that they could, this saved him getting upset and helped him enjoy the game much more.
We then had a second game and as William, who is 11, had lost he decided he wanted the buffers up too and they were able to do this.

Once we had changed our shoes we were taken to our table ready to try the food. The children’s menu is in a place mat style with the menu down the left hand side and a picture of a knife, fork and plate, with the plate cleverly drawn to resemble a bowling ball. There is a choice of 3 starters, 4 main courses and 3 desserts for children and Luke quickly chose the BBQ wings, Cheese Burger and Ice Cream. The older boys decided they would rather eat from the main menu as they find children’s portions too small now and whilst the children’s meal was a good size it wouldn’t have been enough for them so they made the right choice. 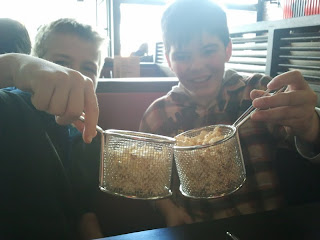 We were spoilt for choice on the main menu, starters ranged from £1 for popcorn, which both boys chose and I finally decided on the BBQ shrimps which were delicious.  The boys both decided to have Cajun chicken fajitas and after a lot of deliberation I plumped for the Pulled Pork with creamed potatoes and South Carolina slaw which was very similar to coleslaw. There were so many exciting dishes on the menu it was very difficult to choose just one dish. Looking around, the food that was being served to other diners looked really tasty and was really making our mouths water. When the food arrived we weren’t disappointed and we all tucked into them and cleaned our plates. 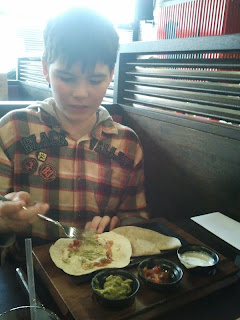 The puddings were just as good as the main courses and it will be worth going back just for the Mud Pie Brownie which was one of the best puddings I have ever tasted. The boys both had the hot fudge sundae and the empty dishes spoke for themselves.
The only criticism I have is that the service was very slow, however Pippa did come over and apologise and explain that extra people had turned up. As this is a brand new restaurant there are bound to be a couple of teething problems and whilst we did have quite a wait we were fortunate that we were sat near the bar and the boys were entertained by the barman who was throwing cocktail shakers around. He caught them most of the time but there was an occasional drop which the boys thought was hilarious! 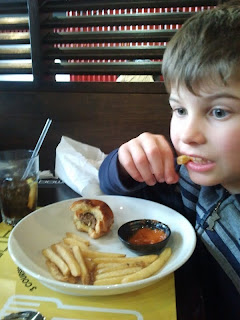 We had a fantastic day out and would certainly recommend it to others.

I am a reviewer for the whatsgoodtodo website and they kindly arranged the visit for us.
We received free bowling and the meal for the purposes of this review but all words and opinions are our own.
Posted by cath at 20:15 No comments: 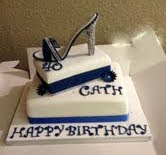 Ruth's friend made me an absolutely gorgeous cake for my 40th birthday. Not only did it look amazing, it tasted delicious too.


Not to be outdone, Grandad decided he would have a birthday cake with shoes on too. Rather than painstakingly making his shoes out of icing, he opted to photograph his work boots, print the photograph and then cut them out before adding them to the top of the cake. 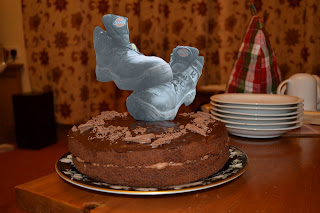 Undead Pets - Night of the Howling Hound by Sam Hay 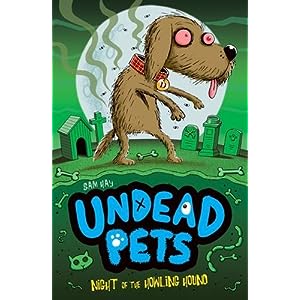 We were really excited when we found out that we had been accepted onto The Little Tiger Panel as we all enjoy reading. Our first book arrived whilst we were on holiday and it was very exciting when we discovered the book on our return.

The Undead Pets books are about Joe, who was just an ordinary boy until he makes a wish on a spooky Egyptian amulet which made him the Protector of Undead Pets. In The Night of The Howling Hound, Joe is on a school trip to an adventure camp where he is visited by Dexter, a scruffy-looking dog, with a howling tale of woe. Dexter doesn’t want his owner feeling guilty for his death, but it’ll be hard for Joe to intervene this time – it turns out that the owner is Joe’s headmaster, the dreaded Mr Hill!

My 7 year old son was very excited when he saw this book as there is a scary looking dog in a graveyard on the front cover and he said it looked awesome! Whilst there are other books in the series, this was the first we had read but it didn’t matter that we were reading out of sequence as this book was a complete story. Now that we have read it my son has asked to get the others in the set as he enjoyed it so much.
The book is split into ten manageable chapters which were the perfect length for a bedtime story; although as each chapter ended we always wanted to know what happened next so usually ended up reading more than we had planned! The writing was a good size and easy for my son to read alone and the illustrations helped tell the story, especially for some of the scarier bits of the book where the pages were black with white writing which really added to the atmosphere. There was plenty of humour in the book which really appealed to my son and he was in fits of giggles whenever Dexter farted and Joe got the blame.