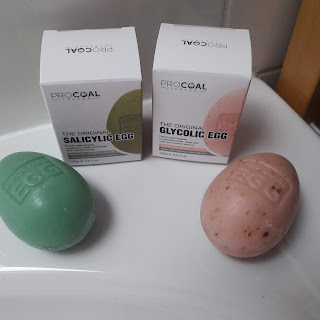 Procoal is not a brand I have come across before and when I agreed to review one of their cleansers I just assumed it would be a liquid cleanser. When the parcel arrived I was therefore intrigued to find two small boxes containing egg shaped soaps which both smelt amazing! These egg shaped soaps are two of Procoal’s sensual facial soaps, The Original Glycolic Egg and The Original Salicylic Egg. The egg shaped soaps are the perfect size to lather in your hands and you don’t need to worry about them rolling off the shower shelf or sink as they have a small flat side on the back which means they sit nicely and stay where you have left them, a simple idea but very effective.

It’s fair to say I was a little concerned about using a facial soap, I haven’t used soap on my face since I was at school as it used to leave my teenage acne prone skin feeling very tight and uncomfortable. Once I discovered cream and liquid cleansers I stopped using soap and have never used it since. The first egg I tried was the The Original Glycolic Egg, I took it out of the box and discovered it is a light pink colour with darker speckles. The fragrance was even nicer once it was out of the box and I when I discovered that The Original Glycolic Egg is a gentle cruelty free, vegan and SLS/SLES free facial soap which targets congested pores, dead skin cells and uneven texture for a fresh and radiant complexion I couldn’t wait to try it out. I suffer from all these facial skin problems, so it was nice to find a product that targeted them all.

The Original Glycolic Egg is formulated with 2% Glycolic Acid, Aloe Vera and Rosa Gallica and Procoal claim that the use of it leads to significantly brighter and smoother skin.

The egg shaped soap is really easy to use, you simply add a little water which creates a nice rich creamy lather which you can then apply to your face. It smells fantastic as you apply it and it is easily rinsed off with water or a cloth. I was really impressed after the first use, my skin felt lovely and soft and there was no tightness at all. I have been using it for almost a week now and I can see a small improvement in my skin already. It normally takes around a month to see the full benefit of a new skincare product so I am hoping that it continues to deliver and do what it promises. It has certainly started off well!

The Original Salicylic Egg is a green soap and this one targets breakouts, acne, blemishes and clarifies pores. My teenage son suffers from spots and acne and so I decided that he would be the best person to try this soap. The soap contains Salicylic Acid, Tea Tree Oil and Aloe Vera and the soap was a big hit with him as it didn’t smell flowery. He has been using it for a week and seems quite happy with it, I would say his skin does look better and again the real test will be what his skin is like at the end of the month.

Overall I am really impressed with these soaps and would certainly recommend them, we have both seen an improvement in our skin and they are a lovely product to use. They cost £9.99 each but as you don’t use much I can see the egg lasting a very long time.

I was really pleased when I was asked to review some Robinsons cordial. We drink a lot of cordial and are already big fans of Robinsons but this was the first time we had tried any of the fruit cordials. The four glass bottles were packaged very carefully in a sturdy cardboard box, each bottle was wrapped in bubble wrap and there was plenty of shredded paper to protect the bottles in transit. I always worry when I am receiving glass bottles that they will break in transit however these were so well wrapped they all arrived intact. We also received six recipe cards giving us some new ways to try the cordial. 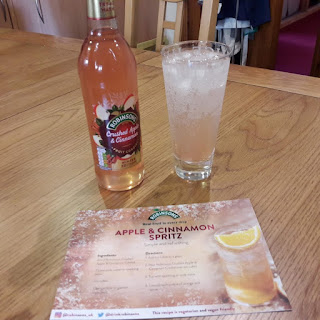 Firstly we decided to try it with water to see what it tasted like before we attempted any of the recipes. As you would expect the initial taste of the drink was predominantly apple with undertones of cinnamon. I’m not a big fan of cinnamon but as the flavour wasn’t too strong it was quite pleasant for a change. The Crushed Apple and Cinnamon fruit cordial has been launched as a “Winter edition” and it is suggested on the bottle to try it with warm water. In our opinion this worked really well, the flavours were much nicer warm and it was the perfect way to warm us up after a cold family walk in the countryside.

The recipe cards had some nice drink suggestions and we have enjoyed trying them over the last couple of days. 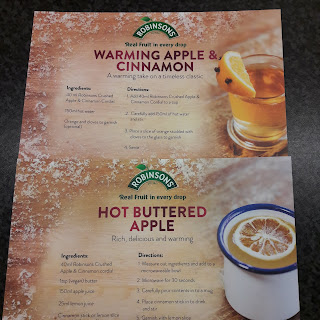 Warming Apple and Cinnamon – this was definitely our favourite way to drink the cordial, you simply added hot water and a slice of orange to the cordial and it tasted delicious. We skipped the addition of cloves as none us us like them.

Hot Buttered Apple – butter, apple juice and lemon juice are added to the cordial and then they are heated in a microwave for 30 seconds. A cinnamon stick is used to stir the drink which adds additional cinnamon to the drink and you then garnish it with a slice of lemon. This was a lovely warming drink and perfect for a cold winters evening. 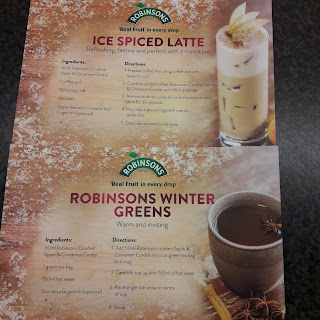 Ice Spiced Latte – this recipe used a coffee pod and soy milk. We had to adapt this recipe as we don’t have a coffee pod machine or drink soy milk so we made it with coffee made from our filter coffee machine and normal milk. You make the coffee and leave it to cool and once cool blend it in a blender with the cordial and milk. Once mixed you add ice to the mixture and then pour into a glass and serve with an apple slice and dust with cinnamon. My Mum really enjoyed this drink, she said it was nice and refreshing and the flavours worked really well together.

Robinsons Winter Greens – the cordial and a green tea bag are placed in a mug and hot water added. You can add star anise to garnish but as none us like star anise we gave this ingredient a miss. My colleagues drink a lot of green tea at work so I took a bottle into work for everyone to try. It was a big hit with everyone and the bottle didn’t last long! 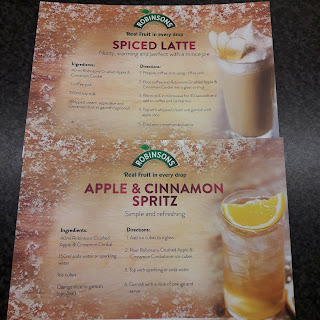 Spiced Latte – This was very similar to the iced latte but was made with warm milk and topped with whipped cream. We all enjoyed this drink and will definitely be making it again.

Apple and Cinnamon Spritz – ice is placed in a glass and the cordial is poured over the ice and topped up with sparkling water and garnished with a slice of orange. This was my favourite way of drinking the cordial, it was lovely and refreshing and full of flavour. I also think it would also work really well in a cocktail.

There are six other flavours in the range and I am looking forward to trying them all. The Rhubarb, Raspberry & Orange Blossom flavour sounds delicious so I think we will try that one next.

We really enjoyed trying the different drinks and if you are looking for something a little bit different then the Robinsons fruit cordials are definitely worth a try.

The bottles retail at £2.50 but they are currently on offer at £2 at Waitrose and Morrisons.