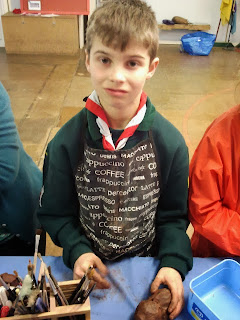 I have a friend who teaches pottery and so we have been incorporating a pottery session into our programme over the last few years. We usually alternate between animals and tiles and this year we were making animals. To help the Cubs there were a selection of plastic animals for them to copy and to give them an idea of size. 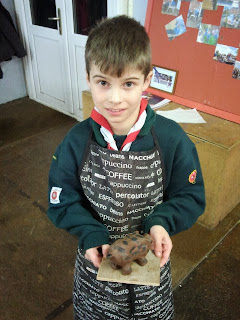 The Cubs all really enjoyed it and they made a wide variety of animals, there were sheep, snakes, dragons and Luke made a pig. One of our young helpers had made a cow when he was in Cubs and he brought this to show the Cubs. He decided that he would make another cow as he wanted to improve a couple of features. 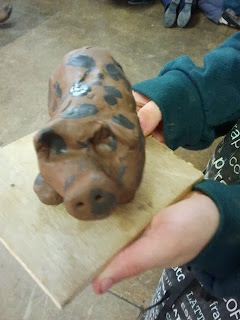 Luke decided to make a pig and I think he has made a really good job of it. The animals have all been taken away to be fired in the kiln and I am looking forward to seeing the finished pots.

Recently I was asked to try the new Origins Plantscription Youth Renewing Face Oil. Whilst I have heard of Origins before I have never tried any of their products before so I was quite excited to see what it would be like.

Initially I was a little worried about using oil on my face as I thought it would leave it very greasy. I have been pleasantly surprised that after only a couple of weeks it has left my skin feeling lovely and soft and smooth.

The Origins Plantscription Youth Renewing Face Oil comes in a plastic bottle with a dropper which is a really good type of packaging for this type of product however I did find that the oil didn’t stay in the dropper and was dripping out without even squeezing the dropper. As you only need 2 to 3 drops I found I had to be quick dropping it into my hands otherwise too much came out.

The oil is used in the evening after you have removed all traces of make up and cleansed your face. It is really easy to use; you just warm a couple of drops in the palms of your hands and press on to your skin. Initially I didn’t think 2 to 3 drops would be enough but I was surprised at how far it went. The bottle will last a long time as you don’t need much and you only use it at night.

I have been really pleased with my first Origins product and I will be looking at their other products to complement the face oil.

The recommended retail price is £38 but as you only need a few drops a bottle will last you ages.
Posted by cath at 21:30 No comments:

During half term we visited Blackpool. I have never been up Blackpool Tower before so we decided that it would be fun to go up the tower. 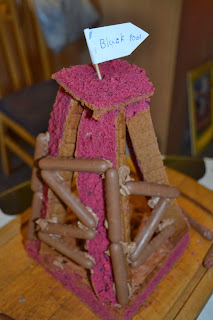 Obviously this isn't the real Blackpool Tower, earlier this year William entered a competition and made a model Blackpool Tower out of cake. Unfortunately he didn't win but the organisers kindly sent a family ticket to visit Blackpool Tower which we used last week.

The first part that we visited was the 4d theatre where we followed a little boys experience of the seaside. Not only did we see his adventures the film was brought to life with real wind, rain and sunshine! The 4d theatre was great and the boys loved it.

After leaving the theatre we went in the lift up to the skywalk which is glass floor that you can walk on. We all stepped on it and looked at the fantastic views. From the skywalk you can climb up a couple of flights of steps and look out over the sea, it would have been nice to be at the top of the tower once the illuminations had  been switched on but we were a bit to early for this. 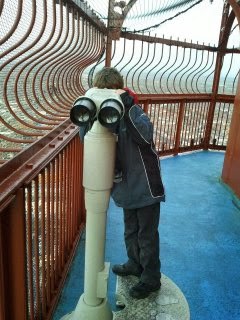 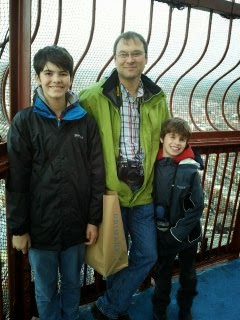 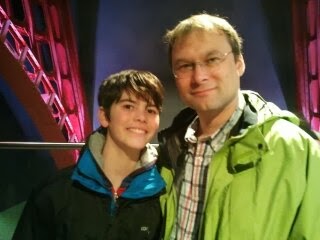 We had promised William and Luke that we would have tea out so we found a Pizza Hut restaurant and ate tea whilst we were waiting for the illuminations to be switched on. 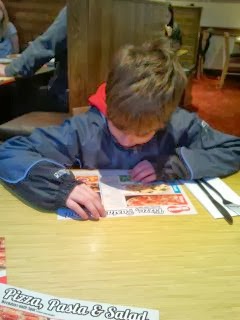 We walked a long way down the front looking at the illuminations and for once Luke didn't moan about the distance we walked as there was so much to look at. The decorated trams looked amazing and really added to the atmosphere. We had a lovely day out and can't wait to go back and visit the circus.
Posted by cath at 19:22 No comments:

I was recently contacted by the UK's No. 1 sports bra brand Shock Absorber with the results of a recent survey about why women may be avoiding exercising.

As a keen walker and cyclist this made really interesting reading and I would love to hear your thoughts on it.

With challenging time constraints, tighter purse strings and the increasingly unpredictable British weather, it seems there are many reasons why women might avoid exercising. A new survey released today however shows that it is actually women’s breasts that are holding them back from doing the exercise they love so much.

The UK’s No. 1 sports bra brand Shock Absorber* spoke with 1,000 active women across the UK to uncover the barriers women face when exercising and participating in sport. The surprising results revealed more than one third (37%) find the battle with their breasts too much to bear, citing breast bounce and discomfort as the primary reason they avoid exercise.

Of the women surveyed, two thirds (65%) said they frequently experience breast bounce, and even the more determined gym-goers who persevere with exercise are still experiencing the knock on effects; with 35 per cent admitting they feel embarrassed, 22 per cent stating that it inhibits their enjoyment and a quarter admitting they don’t work out as hard as they potentially could.

To address this challenging issue, Shock Absorber is on a quest to combat bounce and has created a unique tool called the Bounce-o-Meter. A 3D visual demonstration of breast movement informed by scientific research and lab videos, the tool allows women to adjust the breast size and level of activity for a clear representation of the impact their chosen exercise may have on their breasts. Women can then easily find the best Shock Absorber bra for them to ensure they are supported at all times. 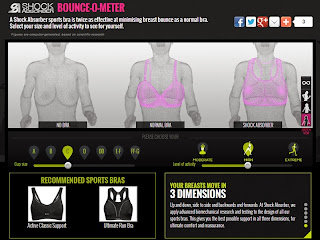 Dr Joanna Scurr, an expert in breast health at the University of Portsmouth commented: “Our research has shown that independent breast movement can cause pain, embarrassment, changes in performance and ultimately can deter women from exercising.  It also shows that exercising without appropriate breast support may lead to stretching of the supporting structures of the breast. I hope that this initiative will help raise women’s awareness of the importance of wearing a sports bra when exercising.”
With so many women battling with their breasts, it is perhaps surprising that a huge 35 per cent of active women surveyed admitted to never wearing a sports bra when exercising.

This lack of awareness was further confirmed by other revealing statistics from the survey:

• One third (33%) of women don’t think they ever need to wear a sports bra because they don’t have large breasts with 18 per cent believing you only need one to support breasts which are D+ cup size
• 70 per cent of the women that don’t wear a sports bra wear a normal bra when exercising
• Half of the women surveyed (49%) said they don’t believe a sports bra is necessary when doing yoga or pilates, with a further 20 per cent not wearing one for an exercise class at their gym (see appendix for full details)

Martina Alexander, Marketing Manager at Shock Absorber, commented: “These survey results make it immediately apparent that there is a real lack of understanding amongst exercising women when it comes to getting the right breast support. The Bounce-o-Meter is a step in the right direction to help educate women and demonstrate that wearing a Shock Absorber sports bra can reduce breast bounce and discomfort, allowing them to get the most out of their workout.”

With 67 per cent of women admitting they frequently see fellow exercisers’ breasts bouncing and wish they could tell them they need a sports bra, the Bounce-o-Meter is the perfect way to spread the message about combatting bounce.

The Bounce-o-Meter can be found on the Shock Absorber website shows how breasts move with no bra, a normal (lingerie) bra and a Shock Absorber sports bra, which has been proven to reduce breast bounce by up to twice as much as a normal bra**.

For further information about the range of Shock Absorber sports bras, visit www.shockabsorber.co.uk. 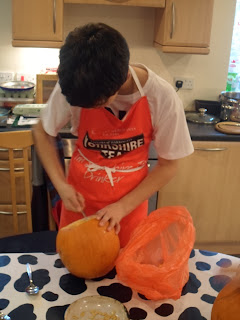 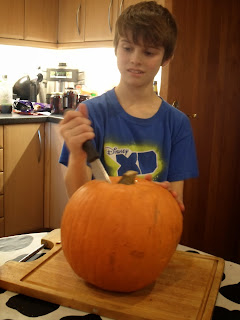 Here are William and Luke carving their pumpkins ready for Halloween 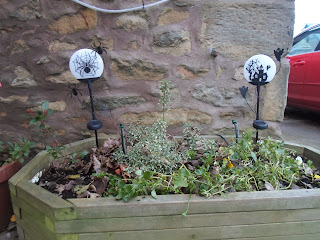 We had a few new decorations this year, thank you Auntie Fiona. 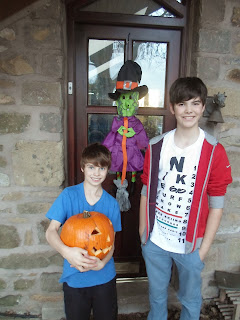 An extra guest! The witch decoration was very effective and fitted perfectly on the front door. 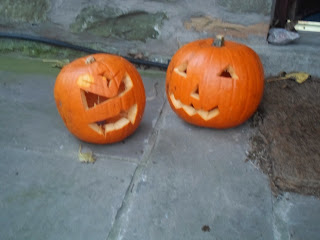 Here are the finished pumpkins.


Luke went Trick or Treating to Grandma's and when we arrived Grandma had made a pumpkin shaped cake which was all orange. There was a witch and bat at Grandma's who wanted to come Trick or Treating with us so we went to Auntie Angela's and then came home.