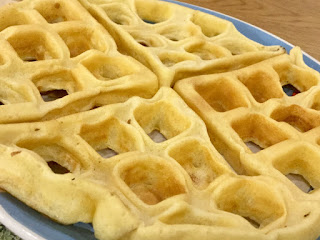 Luke has been using pancake batter in the waffle maker and has created the Panoffle. Luckily he took a picture as it didn't last long!
Posted by cath at 20:29 No comments: 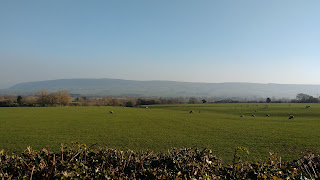 To reach our target of 1,500 miles I think we need to try and cycle at least 100 miles every month over winter and then increase the miles in the spring and summer when we can go out after work. We have done a couple of rides in the dark which have been fun and once you get out in the countryside it is fascinating seeing all the stars. We have plenty of lights so no one will miss us in the dark! It is half term this week so we have been out a couple of times, well wrapped up as it has been quite cold. I have been wearing my bib tights with another pair of leggings on the top, two pairs of socks, a thermal vest, jumper, gilet and cycling top and I have been just the right temperature! I have a fleece headband that I wear under my helmet which keeps my ears warm and I also wear a neckwarmer and gloves. 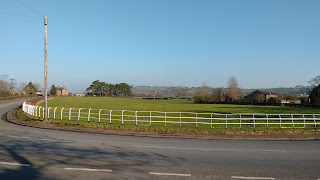 We have been out on some beautiful days and are so lucky having such lovely rides on our doorstep, the countryside around us is so stunning and you get such a good view on the bike. We can head out to the coast for a flatter ride or head for the hills for a tougher challenge - both are fun and it is nice to have a choice of rides.
Posted by cath at 15:43 No comments:

The garden in February 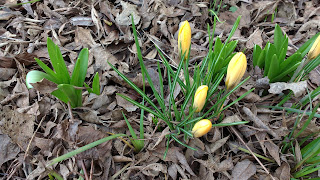 February has been cold but dry so we have been moving the climbing roses to the new bed and replanting some shrubs and bulbs. There were four large climbing roses so Mark trimmed them back before we moved them. I was in charge of digging the holes but luckily the roses didn't have huge roots so I didn't need to dig too deep! 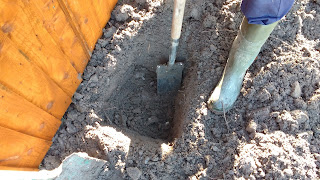 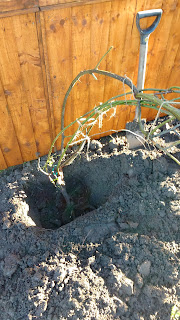 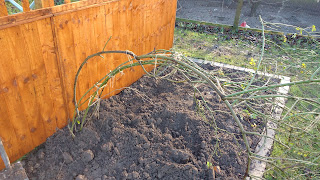 Once the roses were in place Mark fastened wires to the fence for them to grow along and then fastened the stems to the wires. He gave them a good prune so hopefully we will have a good show of roses this summer. 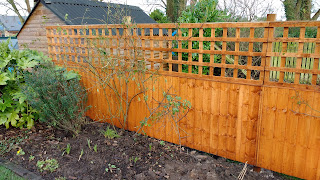 The chickens were quite interested in what we were doing and came to the fence to watch us! 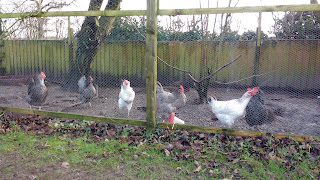 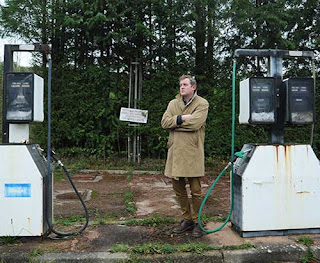 
When William was younger he loved watching Balamory and I am convinced we saw every single one of the 254 episodes! Miles Jupp has come a very long way since his time playing Archie the Inventor who lived in the pink castle. I certainly never thought that 13 years later I would be choosing to watch him again, this time sat in a packed theatre waiting to see his Songs of Freedom tour. Balamory is now a source of amusement and the butt of several jokes, although I did suspect a large proportion of the audience had never been forced to watch a single episode and wouldn't have a clue who Archie was!

These days he is more often seen on “Mock the Week” or heard chairing “The News Quiz”. With a couple of well-aimed comments he makes fun of his stereotypical Radio 4 audience wearing “beige trousers and silk scarves” and adding “I thought I’d died and gone to Waitrose” this was probably quite accurate and got a few early laughs.

Now a 37 year old father of 5, living in Wales, he starts with a comment overheard whilst leaving a previous show that he is a “Nice enough bloke but what unexpected things to talk about.” Despite a promise to turn this statement on its head to bring us an “Unpleasant man banging on about things that are utterly predictable” Miles, never quite succeeds at being unpleasant and instead takes us on a rambling tour of his life, keeping the audience entertained with subjects as diverse as the unacceptable temperature of soup, being mistaken as a train-spotter, Duchy Original biscuits, being too polite and inaccurate signage.

The second half continues in much the same manner as the first, with Miles talking about his victory in Celebrity Mastermind, and then not being recognised as a celebrity by his removal man.

Miles obviously has a great following, almost filling the large Lyric Theatre, and the audience certainly enjoyed the show with laughter throughout. Whilst amusing, we did feel that the performance lacked focus and we struggled to identify a theme for the evening. In reality it was more a collection of witty comments and observations loosely strung together with no real highlights.

We received free tickets for the purpose of this review but all words and opinions are our own.
Posted by cath at 19:15 No comments: