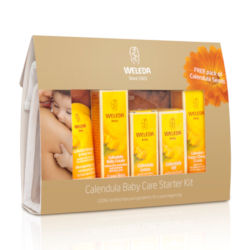 I first discovered Weleda in 2009 when my son was a baby and I was reviewing baby lotions and baby washes for TIPS. Out of all the products that I tested it was the Weleda Calendula products that I continued buying as it smelt lovely and being 100% natural it was perfect for his delicate skin. My eldest son has eczema and I found it was also good for him too as it didn't irritate his skin. Unsurprisingly the Calendula Shampoo & Body Wash was awarded the Best Baby Wash by TIPS in 2009 and has continued to win awards ever since. The Calendula Baby Care Starter Kit makes a lovely gift for a new baby and includes 5 mini sizes of the fantastic Calendula range plus a packet of Calendula seeds!

Whilst the TIPS awards was my first experience of Weleda they aren't a new company, having been around since 1921. It is pleasing to read that Weleda have never used synthetic ingredients, non-natural preservatives, artificial fragrances and colourants in any of their products. Instead they offer 100% natural plant oils derived from sun ripened seeds and fruits such as Sweet Almond and Sesame,pure essential oils from Lavender, Ylang Ylang and plant extracts of Calendula and Chamomile.

Over the last few years I have used all of the different body washes with the Wild Rose Creamy Body Wash currently being my favourite.

Last weekend we were invited to a 40th birthday party. In the invite was the instruction to bring 2 decorated cup cakes for a competition! Now I enjoy baking but my cakes don't normally get decorated as I am not in the slightest bit artistic. Anyway not wanting to be the only family not joining in we set to and made some cakes. A trip next door to borrow a cake decorating book and we were set!


This one wasn't in the book, it was an idea I pinched from another Mum at school who made some cakes for our school barbeque!
I trimmed the bottom of the cake to fit in the wafer cup and covered the cake with butter icing. I then decorated it with sprinkles, a flake and chocolate sauce.
For the tortoise I added green food colouring to turn the butter icing green. For the shell I used the chocolate drops that are sprinkled with hundreds and thousands and cut them into quarters.I used jelly beans for the head and legs.

For the pig I used pink butter icing with a marshmallow nose. Two     dots of chocolate sauce formed the nostrils and pink prawn sweets became the ears. I added small blue chocolate beans for the eyes.
Posted by cath at 15:29 No comments: 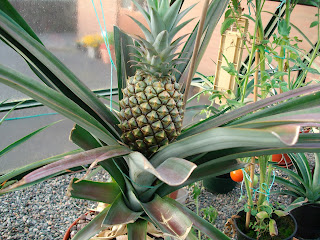 After years of keeping the tops of pineapples Mum has finally managed to grow a pineapple!

For years we have had pineapple plants all over the house and Mum has been convinced that she could get one to grow!
It has taken 20 years but here is a pineapple! 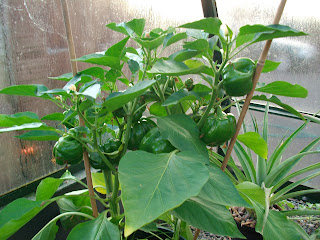 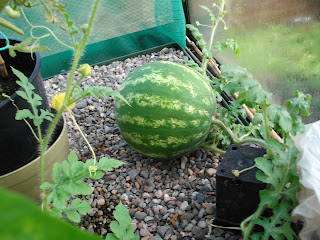 In among the pineapples there are also a couple of pepper plants which are coming along nicely.

She has also tried growing watermelons this year and there are currently 3 growing!