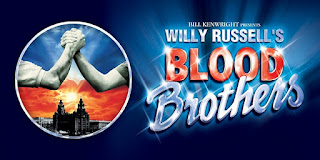 
On Monday night we went to Preston Guild Hall to review Blood Brothers for the What's Good to Do website. We had a fantastic night out and the musical was brilliant, even Mark, who is not a fan of musicals was impressed!

Blood Brothers, written by Willy Russell, tells the story of twins Mickey and Eddie who are separated at birth. Eddie lives a life of privilege with the wealthy Lyons family whilst Mickey stays with his birth mother, Mrs Johnstone, in the slums of Liverpool, eventually taking to a life of crime. The musical tells the story of how they came to be separated, of Mrs Johnstone’s feelings of guilt and how despite not knowing of the other’s existence their paths manage to cross repeatedly becoming best friends, blood brothers, without ever knowing the truth. Eventually they both fall for the same girl leading to tragedy and the truth is uncovered.

Presented by a narrator, the opening scene shows the two brothers dead on the stage with their mother crying over them, he then goes on to present the story and explain what terrible events have brought about this ending. Throughout the musical the narrator talks to the audience but also questions the morality of what the characters are doing, he is always there in the background, watching events unfold almost on our behalf. This works really well and ties the story together.

Sean Jones as Mickey and Mark Hutchinson as Eddie were cast brilliantly as the two brothers, playing carefree children aged 7 “but nearly 8” through teenage years, taking their first steps into adulthood and finally as adults now having to take responsibility for their actions and decisions. In particular Sean’s depiction of young man struggling with mental health problems really changed the mood of the story and heightened the tension on stage.
The star of the show though has to be Linzi Hateley as Mrs. Johnstone, the struggling single mother of 7 children who makes the horrendous decision to give away one of her babies so that she can afford to feed the others. Almost always on stage she wonderfully shows the agonies of her decision and the love for her children. This acting ability on top of her amazing singing voice makes her a real star.

The stage was transformed into a typical Liverpudlian street scene with a view of the famous Liver Building in the background. It looked effective and was quickly adapted to reflect the different locations in the story.
Despite tackling the very serious issues of class, poverty and mental health there was plenty of humour and we found ourselves on a rollercoaster of emotions, laughing one minute and almost crying the next.

The musical took place in a packed Charter Theatre which is a great venue with comfortable seating and a good view of the stage. The Guild Hall complex has a range of bars and restaurants available for those wanting to make a night of it and parking is available in the recently modernised multi storey car park which adjoins the Guild Hall.

This was the first time I’ve seen Blood Brothers and I have to say, in my opinion, it is one of the best musicals I have ever seen. Along with a good storyline and catchy songs it also has drama, excitement, humour and is such a good night out. The musical was 3 hours long including the interval and the time seemed to pass in the blink of an eye. The show is on in Preston until the end of the week and then continues its tour of the UK until December. I’d definitely recommend a visit especially if you’ve never seen it before.

We received frr tickets for the purpose of this review.