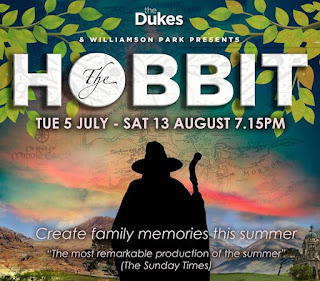 A What's Good To Do review


We have been going to watch the Duke's play in the park for many years now and each year they just get better and better. Over the years our favourites have been The Jungle Book, The Three Musketeers, Merlin and Oliver Twist. This year The Hobbit takes over Williamson Park and transforms it into Middle Earth.


Published in 1937 and written by J. R. R. Tolkien this classic children’s fantasy adventure has recently been adapted into three Hollywood movies by Peter Jackson. Hollywood needed three films and many different locations to retell the famous story yet The Duke’s only needed the beautiful Williamson’s Park and a very talented team to do the same!

It is thought that Tolkien was inspired to write his fantastical books by the Lancashire countryside which he visited during World War Two when his son was studying for the priesthood at a seminary which is now part of Stonyhurst College in the Ribble Valley. Tolkien taught some lessons there and is believed to have worked on The Lord of the Rings, the follow-up to The Hobbit, while staying at Stonyhurst which now has a library named after him. Many years later, the blockbuster films adapted from his books starred Andy Serkis as Gollum who began his professional career at The Dukes 30 years ago and appeared in its very first outdoor production in 1987.

Williamson Park is situated on the site of a former quarry and open moorland to the east of Lancaster. With 54 acres of beautiful parkland, woodland walks and breathtaking views it really is the perfect setting for Tolkien’s classic children’s fantasy adventure The Hobbit. Walking around the park from scene to scene really adds to the atmosphere and the team cope with the challenge of moving the entire audience and cast seamlessly and always have a smile on their face.

The Hobbit tells the story of Bilbo Baggins, who after meeting wizard Gandalf is swept into an epic quest to reclaim the lost Dwarf Kingdom of Erebor, which was long ago conquered by the dragon Smaug. Joining a company of dwarves, led by the legendary warrior Thorin Oakenshield, first they must escape the goblin tunnels, where Bilbo meets the poor twisted Gollum and eventually wins his "precious" ...a magical gold ring that helps Bilbo succeed in his quest. 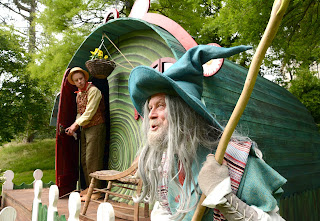 The opening scene is Bilbo Baggins’ Hobbit hole in Bag End, The Shire. The painted wooden house looks amazing with a neat veranda and smoking chimney and all is quiet and peaceful until the dwarves arrive. Gareth Cassidy is outstanding as Bilbo Baggins, he is funny and likeable and we all loved his furry feet! Showing invisibility in a live performance was always going to be tricky but Gareth pulled it off perfectly in this magical show. His dry northern humour works very well in the play and gave us plenty of chuckles. This is Gareth's third outdoor performance for The Duke's, he has previously starred in Hansel & Gretel And More Tales From The Forest and Peter Pan and he was also in the CHristmas production of Beauty and the Beast. I like that the same actors appear in different productions and you get to see them in a number of different roles.
Led by Russell Richardson as Gandalf the small cast, assisted by members of The Duke’s Young Company, manage to portray a huge number of different characters. For a start the opening scene calls for 13 dwarves as well as Bilbo and Gandalf and most of the cast have multiple roles to play. This is very smoothly done with dwarves disappearing and reappearing as elves and trolls without the audience really noticing. It does mean some very fast costume changes are required though. 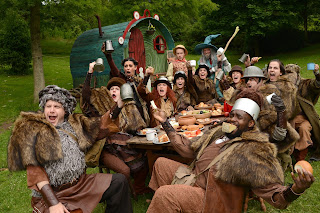 The use of the Ashton Memorial as the dragon’s lair was absolutely brilliant; from the pile of bones at the front to the eerie red lighting the memorial was completely transformed. I will never look at it in quite the same way again, it was brought to life in such a clever way and the smoke billowing from the entrance just added to the magical experience. We had wondered how the Duke’s would bring a terrifying dragon to life but having seen previous plays we knew they would come up with something impressive. We were right, the dragon was fantastic and moved incredibly well considering its size and this scene was my favourite of the evening.

As night fell and we walked to the last scene the way was lit by lanterns, which added to the atmosphere of Middle Earth. The climax of the story is the battle of the five armies which considering the obviously limited number of actors was very cleverly portrayed.
Looking around the audience I saw nothing but smiling faces and walking back to the car at the end of the night the main topic of conversation from everyone was how much they had enjoyed the show. Obviously with only five scenes over three hours Tolkien’s story was somewhat abridged but this was very well done and with the exception of the spiders all the main parts of the tale were still there. Personally I am not a fan of spiders so missing them out really didn’t matter! 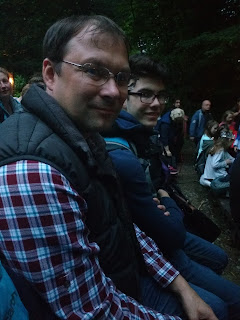 The park is well signposted from the A6 and parking was just £1 for the evening. The play starts at 7.15pm so we had a quick tea before we left but many families take the opportunity for a picnic in the beautiful surroundings. Seating varies at each location, sometimes there are benches or logs to sit on and in other locations the audience can sit on the ground. I would recommend taking a mat or blanket to sit on, especially when it is wet so you are not sat on the ground. The play continues whatever the weather so it is definitely worth checking the forecast before you leave and dressing appropriately.

We had lovely time visiting Middle Earth out and can’t wait to find out where we will be transported to next year.

We received free tickets for the purpose of this review but all words and opinions are our own.
Posted by cath at 19:57