On Tuesday evening we went to Manchester Opera House to review Ray Clooney's Out of Order for the What's Good To Do website. 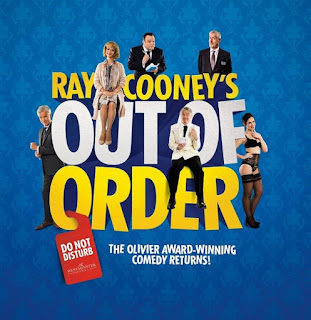 Out of Order, was written in the early 90’s, is set entirely within suite 648 of the Westminster Hotel, London. Junior minister, Richard Willey (Jeffrey Harmer) is planning a romantic liaison with Jane Worthington (Susie Amy of Footballer's Wives fame), one of the Opposition’s secretaries. Willey should have been in parliament for an all night debate but the philandering politician had more important plans for the night. Just as the evening is starting to heat up they open the curtains and discover a body wedged in the sash window of their room. Willey, worried about the effect this will have on both his marriage and political career decides not to report the incident and turns to his PPS George Pidgen to save the day with hilarious results.

The cast is headed up by Jeffrey Harmer as the quick thinking, fast talking politician with Susie Amy as his young attractive love interest. Shaun Williamson, probably best known as Barry from Eastenders plays his loyal but naive secretary. “The Body” was played with great comic effect by David Warwick, you’d think that all he would have to do was lie still, but not in this play. My favourite scene was probably where Richard and George were interrupted whilst trying to move the body and in an effort to cover up their actions pretended to be dancing with him.

Arthur Bostrom was perfect as the polite but ever suspicious hotel manager, always trying to keep control but never losing his cool. James Holmes was fantastic as the wily waiter, a British version of Manuel from Fawlty Towers, who was always ready to take advantage of the situation and make a few pounds on the side.

Of course with Richard planning a night of adultery his wife was bound to find out and sure enough Pamela Willey played by Sue Holderness of Only Fools and Horses fame decided to pop into town and surprise her husband.

From the minute the actors came on stage to the final curtain we never stopped laughing, A collection of logical decisions link together to give a totally absurd outcome. Ray Cooney has brilliantly crafted this story so the audience spends the whole night laughing rather than worrying about whether it makes any sense! With the story unfolding in a single room the set brilliantly reflects the opulence of an elegant London hotel suite. Characters hide in cupboards, use the window more than the door and generally make the most of the situation. This is a wonderful example of a traditional British farce.

Often, when watching a play we are happy to go along with the story but during the interval we were eagerly discussing what was going to happen and how were they going to explain the latest twist in the tale.

We really enjoyed our night out, the play truly was a laugh a minute with every line and situation pulling the characters deeper into the mire. Every single one of the cast was perfect - including the window!

The show is touring the UK until the 22nd July so if it is showing at a theatre near you I would certainly recommend that you find time to go and see it.