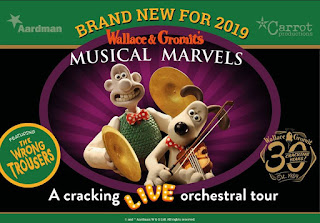 Last night we went to see Wallace & Gromit's Musical Marvels at Blackpool Pleasure Beach - The Arena. In this new show Wallace is preparing to perform his musical masterpiece "My Concerto in Ee Lad" with help from his faithful canine companion Gromit......what could possibly go wrong?!

This great show features new animations as well as the Picture House Orchestra who were all dressed in a variety of costumes, all with a Wallace and Gromit theme. We thought they all looked fantastic and it really helped add atmosphere to the show. I really wasn't sure whether it would appeal to younger children, orchestras aren't everyone's cup of tea but this show works remarkably well because presenter Matthew Sharp ties it all together and brings plenty of humour to the show. We first see him on the screen, having overslept and late for his starring role and then he appears in the centre aisle, running up to the stage ready to start. 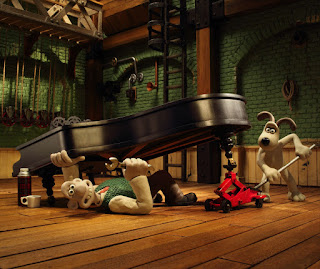 I especially liked the mix of animation, music and on stage performance, it kept everyone entertained which is really important when you have lots of children in the audience. After the orchestra had played the theme tune to The Wrong Trousers we were also treated to a fantastic performance of Bohemian Rhapsody which everyone loved.

Next clips from the Wallace and Gromit films were shown, highlighting the scrapes that the two had got in to over the years and also Wallace's various love interests. These films were accompanied by the orchestra playing perfectly in time with the action on screen and effectively setting the scene without the need for words.

Matthew was great at keeping the show moving and keeping it interesting for children. He introduced all the instruments in the orchestra and we heard each section play alone as well as in a group which I thought was a good way of introducing the instruments to a younger audience.

After a short interval everyone returned to the stage and The Wrong Trousers was played. The orchestra continued to accompany the film and again conductor Simon kept the orchestra perfectly in time with the film.

We had a cracking night out and would recommend that you see the show in one of the venues on the tour. It has finished in Blackpool but there are shows every week until the 9th June and four shows in Edinburgh on the 15th and 16th August. The full list of tours dates are available here.


We received free tickets for the purpose of this review but all words and opinions are our own.
Posted by cath at 21:57