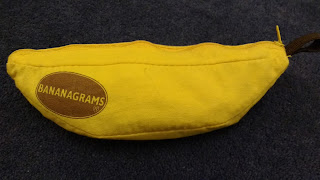 This week we decided to play Banagrams, usually we play as two teams but as William was out we all played separately. 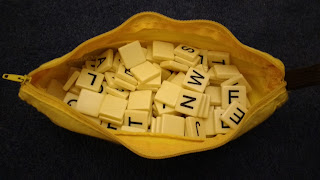 The game starts with one player shouting "SPLIT" and everyone turns over their tiles and tries to make words in a crossword style, very similar to Scrabble but without a board. Everyone plays at the same time so there is no waiting for your turn. Whenever a player has used up all their tiles they shout "PEEL" and everyone collects another tile. You can re arrange your tiles as much as you like to use all the letters. If you have a handful of tricky letters like "Q" "X" or "Z" you can choose to swap them by saying "DUMP" and putting them back in the bunch - you have to take three tiles for each one you dump. I find this can be quite helpful at the start of the game. 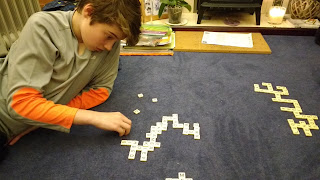 When the bunch has fewer tiles than there are players when you put the last letter in your grid you say "BANANAS" instead of "PEEL." Your grid is checked by the other players and if any grids have misspelled words or unacceptable words then the others shout out "ROTTEN BANANA" and you are out of the game. The tiles are returned to the bunch and play continues until "BANANAS" is called again. The winner is the person who uses all their tiles first and has a grid full of acceptable words. 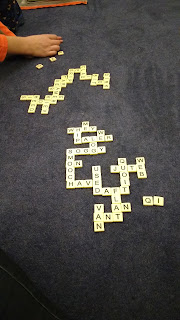 Mark is notoriously bad at word games and rarely wins however he was on a lucky streak tonight and won the first game and third (after a slight dictionary adjustment!!)
Posted by cath at 21:08