On Friday night we ventured into Preston to see The ELO Experience at Preston Guild Hall. We are both fans of ELO and were looking forward to the show. 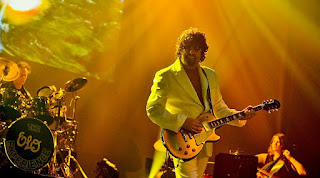 
Since Simon Rigby took over Preston Guild Hall a significant amount of money has been spent and the once tired Guild Hall Arcade is looking fantastic and vibrant again. The addition of excellent restaurants and bars has transformed the Guild Hall Arcade and means you can make a night of a theatre trip.  There are ambitious plans to elevate the complex back to its previous former glory and the planned new bowling complex will be a great addition to the venue. Looking at their website there is an exciting programme of events this summer and we are looking forward to seeing more shows this year.

We arrived promptly and found our seats which is more than can be said for a lot of people. We couldn't believe the number of latecomers that came in and it did become quite annoying after a bit. Two ladies came and sat in front of us, they should have been a few rows forward but because they were late and it would have meant disrupting a whole row they came and sat on the seats in front of us. We have been going to shows for many years and I have to say these were the two worst audience members we have ever had the misfortune to sit behind. They just couldn't sit still and it was unbelievable how many times one lady took her jacket on and off. They disappeared off to the bar a couple of times and there was also a mini drama when one of them couldn't find her phone. Whilst it didn't spoil the night they were incredibly irritating and had no consideration at all for other members of the audience.


The ELO Experience have been touring for 11 years and they put on an amazing performance, playing plenty of old favourites as well as some lesser known tracks from the 1977 “Out of the Blue” double album. Opening to the distinctive ELO sound of Cellos and Violins, the ELO Experience took to the stage with “All Over the World.” My feet started tapping at the start of this song and didn’t stop all night!

The ELO Experience is fronted by lead vocalist Andy Louis who does a great impersonation of Jeff Lynne in both his voice and the trademark hair! Andy is joined at the front of stage by lead guitarist Jan Christiansen and Bass player Pete Smith. Liz Stacey on violin leads the string section consisting of herself and two cellists. Musical director Steve Hemsley plays the all important keyboards and backing vocals and Tony Lawson completes the band on drums and percussion.
The whole band really seemed to be enjoying themselves on stage - especially the two cellists but it was Liz Stacey’s performance on her blue violin that really stood out, the audience really responding to each of her solos. Much of the time the band went straight from one number to the next but occasionally Andy took a few moments to talk to the audience and added a touch of friendly humour to the night. He also encouraged audience participation even including singing along to the French lyrics in “Hold on Tight”.

The sound and lighting, including video projection, was great, nothing too fancy but perfectly complementing the performance. The opportunity for the audience to purchase blue glow sticks in the interval added to the atmosphere and looked quite stunning in the second half of the show.

Fans don’t just want a “Greatest Hits” show so this performance included some of the album tracks from the hugely successful 1977 double album “Out of The Blue” as well as our favourites Xanadu, Roll Over Beethoven, Evil Woman and The Last Train To London which changed its destination to Preston to the delight of the audience!


The band are currently touring until November so there is plenty of opportunity for fans old and new to share the ELO Experience. We had a great night out and would thoroughly recommend the show.

Disclaimer - we received free tickets for the purpose of this review but all words and opinions are our own
Posted by cath at 20:28