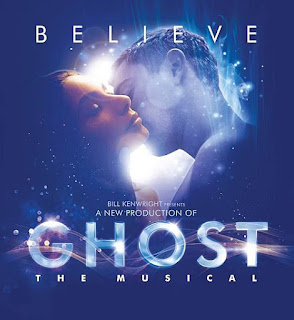 I love going to the theatre and it is always very exciting when we are asked to review a big show at Blackpool. Blackpool Opera House is an amazing place, a huge theatre seating almost 3000 people and is one of the largest theatres in the UK.

It is many years since I saw the film Ghost, I remember the excitement of going to see it at the cinema where it was a huge hit. When we were asked to go and review it at Blackpool Opera House I did wonder how the film would be transformed into a musical. In the film there are many different locations and special effects, such as ghosts rising from dead bodies and walking through doors, which whilst commonplace in films could be difficult to achieve on stage in front of a live audience.

I have to say we were incredibly impressed with how they portrayed the special effects, the huge stage was transformed from an airy Brooklyn loft apartment to a menacing subway station and a busy Manhattan bank in a flash. Fantastic lighting and sound effects were used with great effect to enhance the scenes and create the special effects required for Sam’s time as a ghost. Magician Richard Pinner is part of the creative team and his skills as an illusionist were clear to see. The ghosts rising from dead bodies was very skilfully done, with the dead body staying on stage as the ghost appeared and left the stiff body behind.

Everyone remembers the pottery scene with Unchained Melody playing in the background, it has to be one of the most iconic film scenes ever. This tune is used as a recurring theme throughout the night with a beautiful and moving duet at the end. The other songs, written by Dave Stewart and Glen Ballard, have been specially written for the play whilst not as memorable as Unchained Melody, were perfectly written to tie in with the story and were performed by a very talented cast, supported by an orchestra lead by Tim Whiting.

Sarah Harding was replaced by Kelly Hampson in the show we saw, she stepped into the role of Molly effortlessly. Andy Moss (better known as Rhys from Hollyoaks) played the role of Sam very well and showed what a talented actor and singer he is. For us, and the rest of the audience, the star of the night had to be Jacqui Dubois who took on the role of psychic Oda Mae. She brilliantly reprised Whoopi Goldberg’s character and added real humour to the evening with the audience in stitches every time she was on stage. 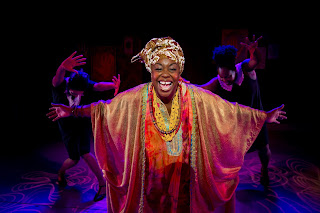 I was surprised by how much the play followed the original story, often when films are adapted for the stage the story is over simplified but but this is not the case in this musical. The costumes were great, with Oda Mae in her extravagant finery and Sam in a Swayze-esque red open necked shirt, both reminders of the 1990 hit.

We had a fantastic evening out and is a must for anyone who enjoyed the film. Ghost is showing at Blackpool Opera House until Saturday 15th October.

Disclaimer - We received free tickets for the purpose of this review but all words and opinions are our own.
Posted by cath at 11:59