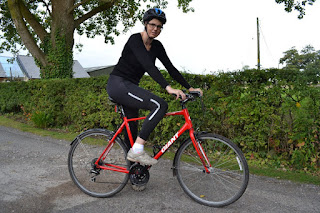 At the beginning of the year I decided to set myself a challenge, to cycle 1,000 miles this year. I have been keeping a monthly total on my blog and at the weekend I reached the half way mark (502 to be exact). We had a couple of eventful rides this week, a puncture on the tandem on Tuesday was a little frustrating especially as the tyre was damaged too and we were a few miles from home. We changed the inner tube and took it steady and managed to limp back. Mark ordered a new tyre and then we went out again on Saturday on the Guild Wheel. The cycle paths were deserted, probably something to do with the football and we commented a few times that the paths seemed slippier than normal. Unfortunately we hit a particularly bad patch after leaving Avenham Park and had our first spectacular fall from the tandem. Luckily we missed the tree and ended up in a heap on the mud with the bike on top of us. Amazingly the bike wasn't damaged and whilst we were bruised and sore we were able to get back on the bike and ride home via the A6. We were both pretty sore yesterday and I have some spectacular bruises and a swollen knee but it could have been a lot worse.