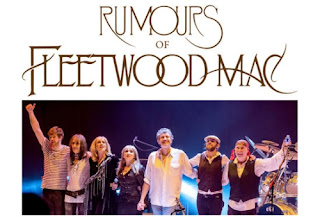 
We have had quite a few reviews recently and seen a variety of different shows. We saw Rumours of Fleetwood Mac a couple of years ago and were thrilled when we were asked to review them again. Here is our review of the night.


Rumours of Fleetwood Mac are perhaps the most well known Fleetwood Mac tribute act and it has even been known for members of the band to join them on stage. Mark was hoping that tonight would be one of those nights however he had to make do with a video introduction from Mick Fleetwood instead!

The band opened the evening with a powerful rendition of “Gypsy” and then several numbers from the 1977 album Rumours. Louise Rogan’s vocals immediately transported me back to my teenage years both with her voice and looks, so similar to original band member Stevie Nicks. The rest of the first half continued with other popular hits from the 70s and 80s. It must be very difficult choosing a playlist from over 30 years of hits but we felt that they selected a good mix of songs that appealed to the mixed age audience.

After a short interval the band returned, with Dave Goldberg moving to the front of the stage as blues legend Peter Green. We felt the first half had been a little reserved, nothing wrong in particular, but the audience just didn't seem to warm up; this all changed in the second half which began with six tracks from the band's early years.  Alan Hughes and Ben Hughes on guitar both seemed to move up a gear and it was obvious that they love performing to a crowd. “Albatross” was a favourite with the audience and then the other members of the band returned to the stage with more of the greatest hits. A couple of slow numbers, Landslide and my favourite, Songbird, showed the quality of the vocals and then the audience were on their feet for the high energy finale. With Big Love, The Chain, Tusk and a drum solo from Alan Cosgrove as Mick Fleetwood, everybody was up out of their seats dancing, singing along and shouting for more.

The lighting for the show was simple but well done and video backdrops were used for some of the numbers.

Each of the seven members of the band were brilliant, with four of them sharing lead vocals throughout the night. With more than 600 performances behind them it is clear that they all enjoy the music of Fleetwood Mac just as much as the fans that go to see them.

The Lyric theatre with 1700 seats is well suited to this type of performance. We had a good view of the stage and the acoustics were excellent. The stage is huge and gave the band plenty of space to perform. There is plenty of parking nearby at the Lowry Centre which cost us £5.50 for the evening. Visitors who make use of the many restaurants in the centre can receive a discount on this rate.

Disclaimer: We received free tickets for the purpose of this review but all words and opinions are our own.
Posted by cath at 11:29