Stones in his Pockets - The Dukes, Lancaster 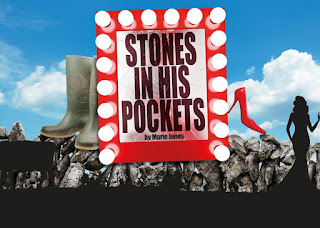 On Friday evening we we were invited to the press night of Stones In His Pockets at The Dukes, Lancaster. Here is our review of the evening.

The Dukes is a lovely theatre in Lancaster city centre and we always enjoy visiting as all the staff are very friendly and we are always sure of a warm welcome. It is easy to find, situated close to the centre of Lancaster with plenty of parking nearby. The car park we used had an evening rate of  £1.40 and was very close to the theatre with some on street parking nearby.

The play is performed in The Round theatre which is an intimate performance area with seating around a central stage and works well with the simple set.

Written 20 years ago by Marie Jones and directed by John Terry, this is a joint production between the Dukes and Chipping Norton Theatre. The production starts a two week run in Lancaster followed by a national tour, visiting Chipping Norton at the beginning of April and 30 more locations finishing in Ramsden on the 28th May.

Set in County Kerry, the story follows two locals, Charlie (played by Conan Sweeny) and Jake (Charlie De Bromhead), as they work as extras during the filming of a Hollywood movie set in their village. The story explores how the feelings of the locals, who are all playing extras in the film, change from the initial excitement about the Hollywood glitz to resentment when it becomes clear that the visiting Americans care much more about finishing the film on time than the feelings of the locals, who want to pay their respects after a local lad commits suicide.

With 15 characters, including the glamorous American female lead Caroline Giovanni who takes a shine to Jake, the play asks a lot of the two actors; they switch almost instantly from one role to another and at whilst at first this was a little confusing, we soon caught up and managed to keep track of the story. Using slight changes in body language and different voices rather than costume changes to reflect these changes in character works very well but it must have been difficult to remember which voice was for each role!
The play, despite featuring the suicide of a local lad, is very definitely a comedy with the two actors working very well together and making the most of the comic dialogue.
Making use of a very simple set and with virtually no props the actors use mime convincingly to illustrate the story, whether that is drinking in the local pub or genuflecting in church. Excellent sound design also helped set the scene with background noises reflecting the different locations.


We really enjoyed the play and would recommend that you visit it in one of the many locations on the tour.