Beauty & The Beast - The Dukes, Lancaster 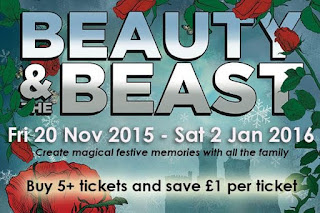 Our family are real fans of The Dukes, the theatre in the centre of Lancaster, which specialises in bringing something a little different to the stage. We have seen a number of their productions and when we were asked by What's Good To Do to review Beauty & The Beast we were thrilled. Here is our review of the night. 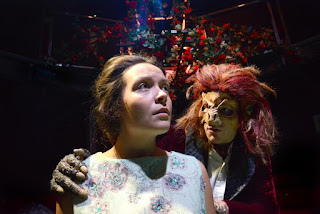 This is the time of year when many families make perhaps their only visit to the theatre to see a pantomime. Most pantomimes simply follow the same traditional stories that have been told for many years; The Dukes break the mold taking a traditional story, putting it in a completely different setting and adding a twist or two along the way. Eddie Robson has skillfully created a masterpiece with his retelling of the classic Beauty & The Beast story and I much prefer his version!

The entrance to the theatre had been decorated with roses and a fake grass floor, setting the scene before we even reached our seats. The play is performed in The Round theatre which is a lovely setting for the production as all the audience are very close to the action. With a circular stage the cast are going to have their backs to the audience at some point in the story but the play is carefully directed to make use of the whole stage, eliminating this problem.

With a cast of just six actors but at least a dozen different roles, quick costume changes were required. I wouldn't highlight the performance of any particular actor as they were all top class and it is nice to see some familiar faces from previous Dukes productions. The opening song was very well choreographed and we knew from this first scene that this show was going be something special. 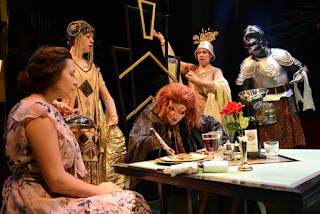 The costumes really made the production shine, the beast's outfit was wonderful with a mask, wig and fake skin all making a quite scary character although the younger girls sat next to us didn’t seem too scared by him! The other costumes varied from mundane everyday clothing to fanciful outfits for the enchanted characters; never has a more elaborate hatstand been seen! Our 10 year old particularly liked the suit of armour, especially when he didn’t want to take it off at the end!
Sound effects and video were used in the show to add atmosphere and also as an integral part of the story. The scene with the video film was very cleverly done and was my favourite part of the show. We thoroughly enjoyed our night out and it was the perfect start to the Christmas season. 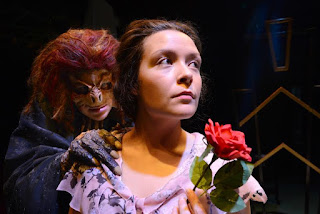 Beauty and the Beast is playing until Saturday 2nd January so there is plenty of time to come and see this brilliant production.

The Dukes is a registered charity and they have set up a number of ways to support them to help safeguard the future of the theatre. Choose from Friends, Patrons or Guardians and you can find out all the details here.