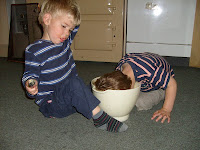 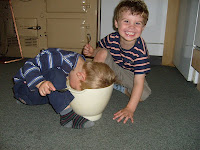 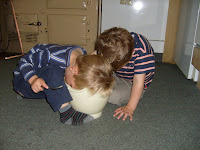 I love baking and I frequently have little helpers who enjoy baking too! Once I have finished baking my bowl is always spotless due to my mixing bowl cleaners! They start by using a spoon to get out every last bit of mixture and end up with their head in the bowl to make sure that every last scrap of mixture is gone.

On Saturday we decided to make a cake for Grandad's 65th birthday. After a lot of discussion my sons both decided that Grandad would like a chocolate cake. (Probably the fact that it is their favourite helped make their minds up). We measured out the ingredients, managed to break the eggs all over the work surface and get flour everywhere. This happens quite frequently when we are baking and adds to the fun. After all it is Mum that gets the job of tiding up all the mess that is made!!!
The ingredients were eventually mixed together, poured into the tin and put in the oven. Once this was done the most exciting part of cake baking occurs - cleaning out the bowl! Today my mixing bowl cleaners had a bonus because we had used the electric mixer to make the cake so we had an extra two beaters for them to clean. They quickly licked the beaters before progressing to the bowl and as usual the bowl was spotlessly clean once they had done their magic.

The recipe said bake for 20 to 25 minutes however when we looked at the cake after 25 minutes it was still runny in the middle. We left it for another 5 minutes, and checked it again but it still wasn't ready. We didn't want the cake to burn so I turned it round and set the timer for another 7 minutes. This time the cake was looking less runny so we left it for a further 5 minutes before we decided it was finally done. 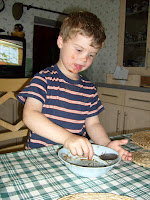 Once the cake had cooled we decorated it with melted chocolate, cherries and edible pink glitter. Grandad thought his cake was delicious and really enjoyed his birthday party.