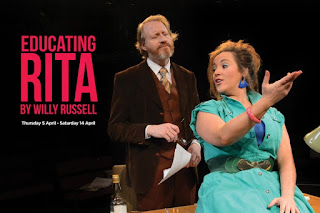 
Last week we went to see Educating Rita at the Dukes, Lancaster. We love going to The Dukes as it is such a lovely theatre and you are always made to feel very welcome.

The Dukes are always looking at new ways to bring the arts to Lancaster and Educating Rita is a production co-produced with the New Vic theatre, Newcastle under Lyme. It will be performed there once the run at The Dukes ends and will then go on tour to the Stephen Joseph Theatre in Scarborough.

Educating Rita is a play is about Rita, a 26 year old Liverpudlian hairdresser who has spent her life following the crowd. Fed up with her job as a hairdresser and a husband who only wants her to have children she wants more from life so decides to better herself and break free by enrolling on an Open University course in English Literature. The play takes place entirely within the office of her tutor Frank, played by Andrew Pollard, who himself is bored with his life of poetry and academia and is a confirmed alcoholic, taking on the role as tutor to pay for his drink. Rita sees in Frank a part of life that she always knew existed but never had access to, whilst Frank loves the simplicity and innocence of Rita’s views on life.

Lauryn Redding was very well cast, her accent was good and she played her role compellingly as the strong willed Rita against Andrew Pollard’s cynical Frank. The characters had an excellent rapport and Andrew Pollard was convincing as Frank, the alcoholic lecturer stumbling around the stage.

The set was fantastic, transforming the central space into a stereotypical university professor’s study, littered with books and papers and a selection of dog eared furniture hiding Frank’s inexhaustible supply of whisky. The actors used the area well, moving around so that all parts of the audience were able to take in the story. Whilst Frank wore a shabby brown corduroy suit, Rita’s 1980’s outfits changed throughout the show reflecting her increasing confidence and new-found comfort with university life. The 80’s feel was backed up with music from the decade playing in the background between scenes.

Educating Rita is a comedy by British playwright Willy Russell. The stage version debuted in 1980 but the story was made famous in 1983 when Michael Caine and Julie Walters took the lead in a very successful film version of the play. Whilst we have heard of the film neither of us had seen it before but after reading a synopsis on the internet we both decided that it sounded good and were looking forward to a good night out. We were not disappointed at all and really enjoyed this new version directed by the artistic director of The Dukes, Sarah Punshon.

The Dukes have produced yet another winning show, adding a touch of the Duke’s unique magic to a well-known play by one of the great British playwrights.  This show is definitely worth seeing and we can guarantee you will have a fantastic night out. 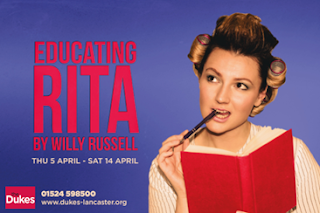