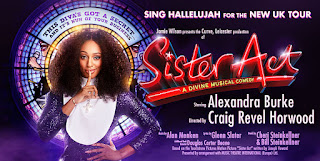 
I was really excited when I found out we would be reviewing Sister Act. It is one of my favourite films and I was really looking forward to seeing the stage show at Blackpool Opera House. Located within the famous Winter Gardens it is one of the UK’s biggest theatres and has seen a cast of thousands tread its boards since it first opened in 1939. It seats almost 3,000 and from what we could see most of these seats were full for the opening night of Sister Act. Whilst many modern theatres have quite small stages, this one is large and wasn’t cramped by the large set and cast. The theatre has a couple of bars but being situated in the centre of Blackpool means there are plenty of options when it comes to pre-show drinks or meals. There is ample parking nearby either on ground level or multi story car parks. We paid £3.00 to park on a car park that was only a few minutes walk away from the theatre.

Based on the hit 1992 film, Sister Act is directed by Craig Revel Horwood and the music is by Alan Menken with lyrics by Glenn Slater. It did come as a big surprise when we realised that the hit songs of the film weren’t featured in the stage show as for me the music was the most memorable part of the film.

We first meet Deloris singing in boyfriend Curtis’s nightclub. X Factor winner Alexandra Burke had a very hard act to follow stepping into Whoopi Goldberg’s famous shoes, but she really pulled it off. There is no doubting that she was the star of the show, demonstrating the quality of her voice throughout. We also thought the actors who played Sisters Mary Robert and Mary Patrick, Sarah Coggin and Susannah Van Den Berg were excellent. They really seemed to be enjoying themselves and their performances were really close to the characters in the film. All the music for the show was performed live with most members of the cast playing instruments as well as singing.

Most of the story takes place in the convent and the set was very good with a balcony that cast members could move to when playing their instruments, unfortunately this was always in the background, so for some inexplicable reason the organ was still on stage when the plot had moved elsewhere. For the finale the set split in two and a great illuminated staircase was revealed for the final number.

The story did follow that of the film, albeit in a very much abbreviated form. Unfortunately it was very slow to get going and it was only with the final song of the first half that the pace started to pick up. The second half was better with a few more songs but these were almost all sung by individual cast members rather than the choir. The show finished with an upbeat finale and the audience, who all seemed to enjoy the show, rose to their feet.

This is a difficult show to review, Alexandra and her fellow cast members all performed well but we felt the storytelling lacked depth and relied on the audience already being familiar with the film. The main theme in the original film is Deloris taking on the training of the choir and this is only briefly alluded to in the stage version. For a film that is remembered for a high energy choir singing popular hits - the stage show really missed the mark. Having said that, the audience loved it and on the way out there were plenty of smiling faces.

Sister Act is running from Tuesday 22nd August to Sunday 27th August 2017 at Blackpool Opera House. It is definitely worth booking tickets quickly as Blackpool is full of holiday makers at the minute and judging from the full house for the first performance it is looking to be an extremely popular show.

Disclaimer - We received free tickets for the purpose of this review but all words and opinions are our own
Posted by cath at 14:16