The Chef Show, The Dukes 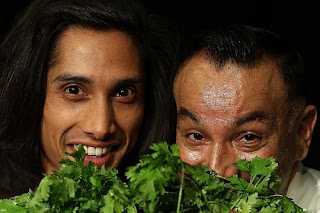 Last Friday night we went to The Dukes to see The Chef Show. We were told it was a combination of a play and a cookery demonstration so I have to say we were intruiged! We enjoy going to the theatre and Indian food so this sounded like a winning combination.

The Chef Show is written by Nick Ahad and stars Rohit Gokani and Kamal Kaan and is currently touring the North. We were invited to the opening night of the 2017 tour at The Duke’s Lancaster.

Before we arrived we really weren’t sure what to expect, a two man play about life in an Indian restaurant, with a real chef on stage cooking during the play; how would it work and more importantly would we be able to taste the food! We liked the sound of it and when we walked into the Round Theatre there was a lovely atmosphere as Rohit and Kamal were mingling with the audience and chatting, making everyone feel very welcome.

The idea of the Chef Show came to Nick at a curry night in a village hall near his home and now we have seen the show we feel it was a fantastic idea and wonder why no one had thought of it sooner!. The chef cooks whilst the play carries on around him but at a couple of points in the play the dialogue stops and he talks about what he is cooking and we learn a little about the food and his own experiences of life in the restaurant trade.

The set was very simple but the presence and skill of the cast meant they needed few props. Rohit plays Abdul, who emigrated to England with just £12 in his pocket and now owns a successful Indian restaurant in a small village in Yorkshire. His son, played by Kamal, thinks his dad, who isn’t in the best of health, should transfer the running of business over to him. What he doesn’t appreciate are the various relationships that have been built up with the locals over many years. The events of the play teach the young man that there is more to running a restaurant than just cooking and serving food.

The two actors play a great many roles, from other staff members to the various stereotypical customers (both male and female) switching seamlessly from one to another. The problem with actors playing multiple roles is that it can be confusing but the characterisation was so good that we were never unsure as to what was happening.  Whilst dealing with some more serious themes like racism there is also plenty of humour, we especially liked the portrayal of the drunken hen party and the couple on their first date. Whilst the set was minimal, the sounds of cooking and the delicious aromas of spices really drew us into the story and placed us right into an Indian restaurant without using a single piece of flock wallpaper!

The chef changes with every venue, Nurrul from Lancaster’s Bombay Balti was our chef for the evening and his food was excellent, we tasted a vegetable bhuna during the interval and a chicken shatkora, a traditional Bengali dish, at the end of the night.

We really enjoyed this production at The Dukes, and would definitely recommend that you go and see the show on its 2017 tour. It’s a great night out, something a bit different from the norm and there’s even food provided!

We received free tickets for the purpose of this review but all words and opinions are our own
Posted by cath at 21:06