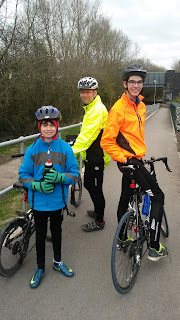 Last night was a nice evening so we decided to ride to McDonalds for tea; we had a nice ride and built up a good appetite! Whilst sitting outside McDonalds, a couple of local lads appeared quickly followed by more and they were really quite intimidating. We felt quite uncomfortable sat with the boys and it has to be the quickest burger and chips we have ever eaten! We made a speedy exit and cycled back along the old train line. We had never cycled along the old railway before and unlike most old railways it wasn't especially cycle friendly. There were lots of bike barriers to negotiate which were tricky enough with a normal bike and the only way to get the tandem through was lifting it up on the back wheel. It's not a route we will be going on again but it was nice seeing where the railway went. 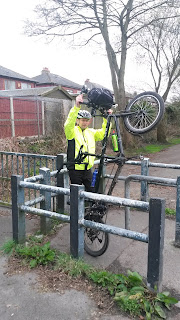